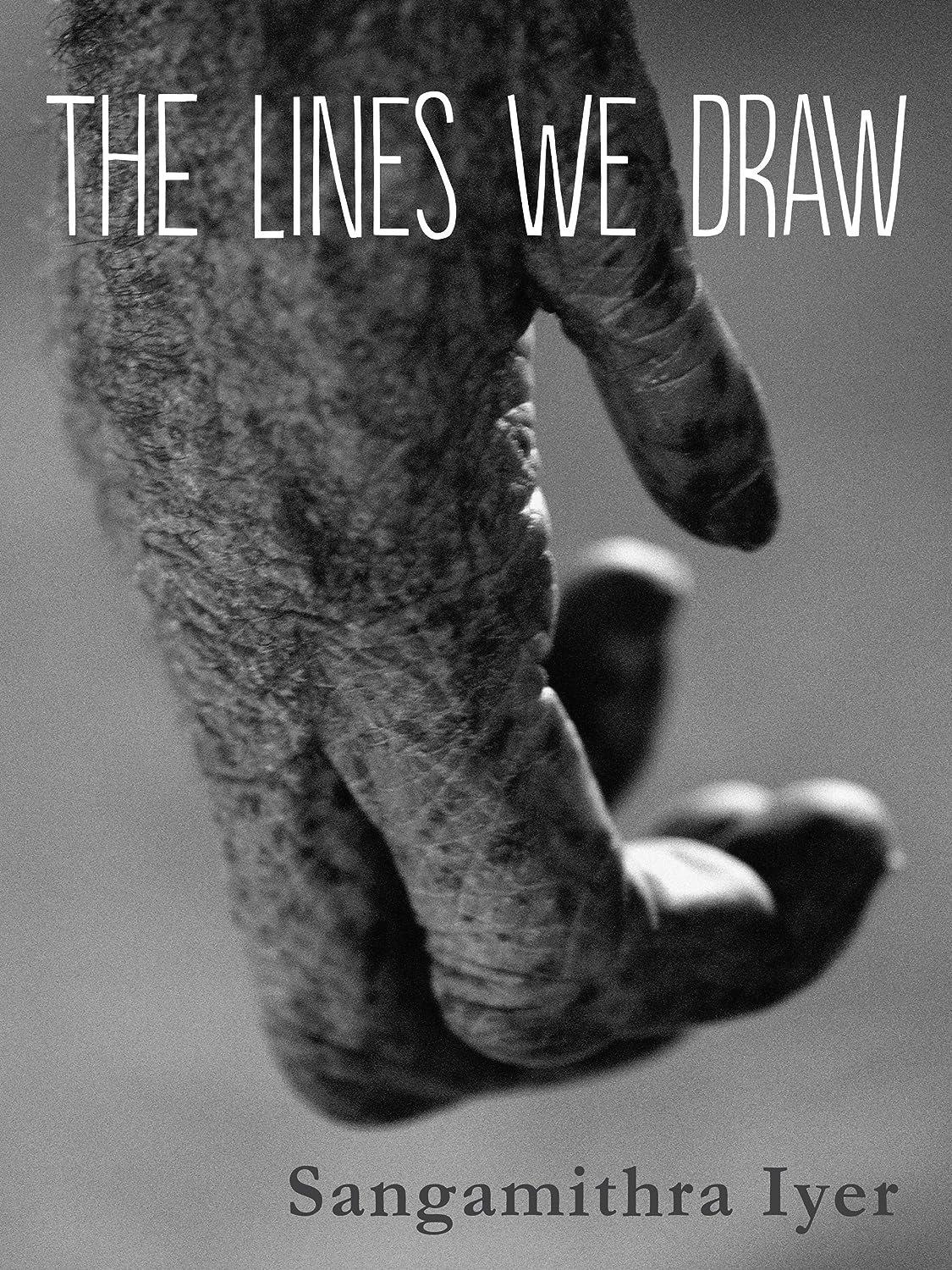 I am beyond excited to announce that my longform nonfiction narrative story “The Lines We Draw” has been published as a short ebook by Hen Press, the new digital publishing arm of Our Hen House. I can’t thank Our Hen House enough for their support, keen insights and feedback on this piece. About this story:

“This is story about boundaries — physical, biological, and ethical — it evolved out of a conversation with the late Dr. Alfred Prince, a hepatitis researcher, about the use of chimpanzees in medical research, and expanded into a larger discussion about ethics. Prince left New York University’s Laboratory for Experimental Medicine and Surgery in Primates (LEMSIP) in the 1970s to establish New York Blood Center’s chimpanzee research colony in Liberia. The story weaves various threads and makes connections among logging, the Liberian Civil War, and vivisection. Chimpanzees are slowly being phased out of research in the United States, and the New York Blood Center has ceased testing in Liberia, but questions remain about the fate of laboratory chimpanzees.”

You can purchase and download the eBook, The Lines We Draw, on Amazon, iBooks, and Barnes & Noble.

Would love to hear your thoughts.

“Sangu’s resulting narrative offers a heady dialogue—the animal activist and the animal exploiter—but Sangu handles it with aplomb, and her writing is sometimes more poetry than prose.”

See more of my work here:

“The impulse to write a book appears to run like a fever through those of us who’ve lived with apes,” declares Rosemary Cooke, the narrator of Karen Joy Fowler’s recent novel We are all Completely Besides Ourselves. Rosemary goes on to list those who came before her: “The Ape and the Child is about the Kellogs. Next of Kin is about Washoe. Viki is The Ape in Our House. The Chimp Who Would be Human is Nim.”

I’m no stranger to the genre of primate memoir, particular the stories of chimpanzees who were cross fostered and raised as human children to participate in language studies. I read Roger Fouts’ Next of Kin in college. It inspired me to learn American Sign Language and spend a summer with Washoe, Moja, Tatu, Dar and Loulis in Ellensburg Washington. It was at the Chimpanzee and Human Communication Institute that I was then introduced to others who had spent their lives among apes. Like Rosemary, I discovered Leakey’s women: “…I checked out every book, I could find on the monkey girls‑Jane Goodall (Chimps), Dian Fossey (gorillas), and Birute Galdikas (orangutans)”

Years later, I read In the Kingdom of Gorillas, before a trip to Rwanda. When discussing primate memoirs, I cannot forget to mention Robert Sapolsky’s A Primate’s Memoir, which opens with the  line: “I had never planned to become a savanna baboon when I grew up; instead, I had always assumed I would become a mountain gorilla.”

Fowler’s novel is a fictional primate memoir, but hers is not the story of a researcher and his/her subject, but rather about the fate of the human children of researchers who were raised, briefly, with a chimpanzee. There’s not too much known about the human siblings of these cross-fostering experiments. Donald Kellogg was raised with the chimpanzee Gua for the first 19 months of his life. His parents terminated the experiment when Donald started picking up chimpanzee vocalizations rather than Gua picking up human ones. Later in life, Donald committed suicide in his early 40s.

Fowler’s story is loosely based on the Kellogg’s experiment, but also draws from other chimpanzees’ stories. The Cooke Family is based in Bloomington Indiana, where the Kelloggs did their research several decades earlier. At the time of writing the book, Fowler didn’t know the Kellogg’s had another child. Their daughter contacted Fowler after the reading the book. In an interview with BookSlut, Fowler notes “She was born about the time the experiment ended, so she has no memory of it herself, nor would her brother, who was only nineteen months old when the experiment ended. But she feels strongly that it completely deformed her family.”

In the beginning of Fowler’s novel, the reader learns only that our narrator, Rosemary Cooke, has a mysterious sister named Fern who disappeared when Rosemary was 5 years old and an older brother named Lowell who left home when she was 12. Rosemary only reveals the fact that Fern is a chimpanzee about a third of the way into the book. She has her reasons for withholding.

“I wanted you to see how it really was. I tell you Fern is a chimp and, already you aren’t thinking of her as my sister. You’re thinking instead that we loved her as if she were some kind of pet.”

END_OF_DOCUMENT_TOKEN_TO_BE_REPLACED

I had the pleasure of presenting at the first TEDx at Cooper Union this April. Thanks to Nina Tandon for hosting and Noemie Charlotte Thieves for producing videos of the event.  See all presentations here.  My presentation is adapted from my essay Soiled Hands in the anthology Primate People.

Primate People: Saving Nonhuman Primates through Education, Advocacy, and Sanctuary (University of Utah Press) comes out this month.  I am very excited to read this anthology edited by Lisa Kemmerer with a forward by Marc Bekoff.  My story “Soiled Hands” is the closing essay in the this collection.

I am adapting this into a Tedx talk at Cooper Union on April 24, 2012 which is themed “Found in Translation.”

I was so pleased to hear the news that the last of the chimps formerly housed at the Coulston Foundation are on their way to the wonderful Save the Chimps Sanctuary in Florida.

I remember the outrage in 1998, when the U.S. Air Force placed 111 of their former research subjects in Coulston’s care instead of retiring them to sanctuaries.  The Coulston foundation was notorious for animal welfare violations, and eventually the NIH, FDA, and USDA pulled their funding.    On the verge of bankrupcty, Coulston sold his facility to Dr. Carole Noon, director of the Save the Chimps.

Carole Noon, was my very first interview subject for Satya Magazine.  The work that she and Save the Chimps were doing was amazing.  At the time, they were running two sanctuaries.   One was a dream chimp paradise in Florida-this was the ultimate destination for all the chimps.  As they were building and expanding, they were slowly transferring chimps from Coulston’s former facility in New Mexico.  In the mean time, for the Almogordo chimps, their digs received a complete makeover, and Carole and her team worked on renovations, socialization, enrichment for these chimps who were caged in solitary.

Monday night, the last of the chimps housed in New Mexico, started on their journey— “The Great Chimp Migration“— to Florida.

I wish Carole Noon, who passed away in May 2009, was here to witness it.   As she told me, the role of the human being is often just “opening the door.”   She’s definitely opened plenty of doors for hundreds of chimpanzees.

What is also particularly fascinating in the book is  Siebert’s description of the history of trials against animals as described in The Criminal Prosecution and Capital Punishment of Animals: The Lost History of Europe’s Animal Trials, where all animals were granted a lawyer—and “accorded the same legal rights as human beings, right down to being provided with the best available defense attorneys, and all at the taxpayer’s expense”   He goes on to suggest that if captive animals today who have been put down as a result of a violent outbreak, were accorded “the same legal privileges as their medieval counterparts, the most amateur lawyer would be able to get them all off on insanity pleas.” END_OF_DOCUMENT_TOKEN_TO_BE_REPLACED