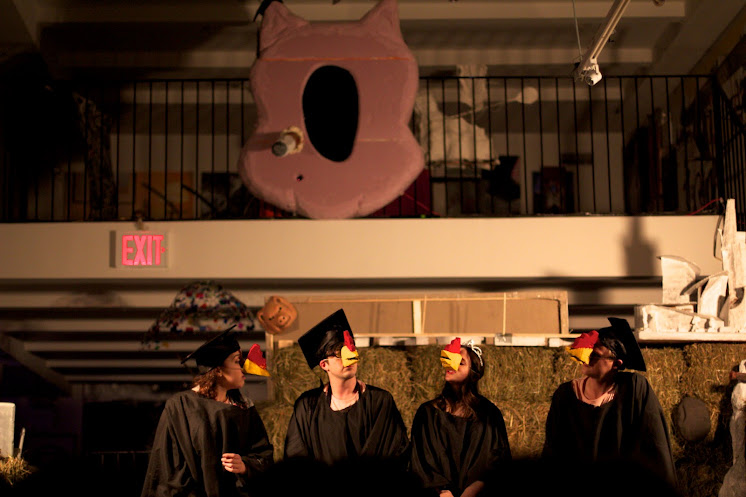 In the center of the Brucennial Gallery Exhibit downtown on Bleecker Street, stacks of hay bales set the stage for Bruce High Quality Foundation’s production of “Animal Farm- the Musical“, which premiered the first weekend in March.   In this Orwellian adaptation, the chicken trustees at BHQF University, reveal the financial crisis facing the school and decide they must “hatch a new strategic plan. Everything must be ‘on the table.’”

One hen trustee of the equity firm ‘Beak and Claw, ’ suggests they “ Diversify our debt, prioritize our portfolio, reassess our risk…No risk. No reward.” Another wants to clean up the pig stye, and create a 21st century institution. “What we need is a Goddam state of the art architectural monstrosity.”

These options don’t pan out. “ The economy has collapsed. ..No one could have seen this coming. No one should be blamed,” the trustees cluck.

Throughout the play, the chickens trustees switch their beaks to snouts and transform into recent piggie art student alum, while  Law and Order sound effects signal scene changes.  The piggies struggle making ends meet with their day jobs and finding time to pursue their passions : (” We’ve got art to make, but we’re stuck working every stinking day.” ) They are reminded and inspired by these truths expressed in song: “Every pig is an artist/ No pig flies alone/ Teaching others is our greatest work/We can do it on our own”

END_OF_DOCUMENT_TOKEN_TO_BE_REPLACED

I was recently reading sections of  Up In the Old Hotel, which anthologized  Joseph Mitchell’s writings for the New Yorker.  It included a 1940 article on “McSorley’s Wonderful Saloon“, where Peter Cooper frequented:

“Mr. Cooper in his declining years, spent so many afternoons in the back room philosophizing with the workingmen that he was given a chair of his own; it was equipped with an inflated rubber cushion. (The chair is still there; each April 4th for a number of years after Mr. Cooper’s death, on April 4, 1883, it was draped with black cloth.) Also like other steadfast customers, Mr. Cooper had a pewter mug on which his name had been engraved with an icepick. He gave the saloon, a life-sized portrait of himself, which hangs over the mantel in the back room. It is an appropriate decoration, because, since the beginning of prohibition, McSorley’s has been the official saloon of Cooper Union students. Sometimes a sentimental student will stand beneath the portrait and drink a toast to Mr. Cooper.”

After the visit to Peter Cooper’s Grave on February 12, 2012,  some Friends of Cooper Union, gathered for a drink at this watering hole. (FYI: McSorley’s Ale is vegan).   Some things have changed since Peter Cooper’s days at McSorley’s.  Most notably, the inclusion of women starting in the 1970.  (Previous motto was, “Good Ale, Raw Onions and No Ladies.”).  Cooper Union, in contrast, opened its doors to women since its inception in 1859, and never discriminated by race, gender, creed or class.

McSorley’s other motto “Be Good or Be Gone,” is still in effect, and Cooper’s table, chair, and portrait are still on display.  The lyrics of a song about Peter Cooper’s Table are also mounted on the wall.

On February 12, 2012, Friends of Cooper Union organized a visit to Green-wood Cemetery in Brooklyn to pay respects to Peter Cooper on his 221st Birthday.  Cooper, his wife, children and their families are also buried there on a private grassy mound, on a small traffic island.  Much chiseling was needed to carve these beautiful words that describe Cooper’s contributions to society.  Here’s what was written, taking up multiple sides of this gravestone monument:

PIONEER UNDER THE FREE

INSTITUTIONS OF A NEW NATION IN WORKS OF

AND OF FAR SIGHTED BENEVELENCE.

FOUNDER OF THE COOPER UNION

OF SCIENCE AND ART, WHICH HE

CONCEIVED WHEN A POOR

AFTER MANY YEARS OF

FORTUNE FOR THE PUBLIC GOOD.

END_OF_DOCUMENT_TOKEN_TO_BE_REPLACED

In discussing his original wishes for  Cooper Union in his unpublished memoir, Peter Cooper stated that the ”subject of the science of government should forever be one of preeminent importance in the course of instruction.” A gentleman by the name of William Foster, then 92 years old, read about Cooper’s intention, and wrote to Peter Cooper to tell him how much he agreed with this concept. Foster had witnessed massacres in the French Revolution, and told Cooper that America was on the verge of a violent struggle (the Civil War), and “who ever lived to see that struggle would witness a scene that would leave as mere gymnastics the massacre that he had witnessed in France,” Cooper recalled:

“So deeply impressed was I with that terrible fear of that approaching revolution that I placed on the front of the Cooper Union the single solitary word “Union,’ and on the other end I placed the words of “Science and Art,” having a determination in my own mind, if I ever lived to finish the building, I would invite all the Governors of the Southern States and all the Governors of the Northern states to meet me here in New York and dedicate that building to Union.”

Cooper had further plans to get all the Northern Governors and Southern Governors to tour each other’s states, “hoping thereby to make them better acquainted with justice and to let them see the decided advantages that could be obtained by a more perfect union.” END_OF_DOCUMENT_TOKEN_TO_BE_REPLACED

Edward Minskoff, the developer of 51 Astor Place (the former home of Cooper Union’s Engineering Building ) recently revealed renderings of the future site—a 12 story tower and public plaza, designed by Fumihiko Maki.  CURBED, launched its own design contest for alternative ideas for this space and the winning entries were posted here.

I was recently in the Cooper Union archives looking at photos from the late 1950s just before the college’s centennial. Then, 51 Astor Place looked surprisingly similar to what it does now– empty.  In 1956,  The Cooper Union Alumni Association took advantage of this this vacant lot to host an Alumni Day Luncheon.  A circus tent was pitched on site, and “800 hungry alumni” were fed.

END_OF_DOCUMENT_TOKEN_TO_BE_REPLACED

Coinciding with the release of Brighter Green’s Case Study on India, Veg or NonVeg? India at a Crossroads, I will be writing a series of blogs over at Brighter Green about the intersection of recent writings on India with issues raised in our case study: “Over the past several years, there has been a considerable amount of writing about modern(izing) India. From different angles, writers are witnessing and documenting a subcontinent undergoing significant shifts. The New York Times recently launched their first country specific blog, India Ink. At Brighter Green, we’ve been most interested in the social and environmental issues that are emerging with a changing country, a changing diet, and a changing climate.  Our recent paper and our videos on India’s chicken industry [now with over 50,000 views on Youtube!] and dairy and beef industries delve into this further. In this blog series, I hope to highlight writings on India and where they intersect with sustainability, equity, and rights, particularly in the context of food security and climate change.

Read Part I of this series: Red Sorghum and ‘F&B’  which discusses Siddartha Deb’s recent book, The Beautiful and the Damned: A Portrait of the New India.

Check out Part II of this series, which discusses AkashKapur’s article in the October 10, 2011 issue of the New Yorker, “The Shandy: The Cost of Being a Cow Broker in Rural India.”  The article is an excerpt of his forthincoming book.  India Becoming: A Portrait of Life in Modern India.

Part III, of this installment of the Literary Animal: Reading India serieswill be a slight foray into linguistics, and discuss the language of violence and Katherine Russell Rich’s Dreaming in Hindi: Coming Awake in Another Language.
Part IV of this series explores the prologue of Amitava Kumar’s book, A Foreigner Carrying in the Crook of his Arm a Tiny Bomb,  where a poultry farmer provides a glimpse into how  both the war on terror and  looks and avian flu have impacted the region of Walavati in Maharashtra State.
Katherine Boo’s Behind the Beautiful Forevers is the subject of Part V of this series that explores corruption, justice, gender, and animal rights in slum called Annawadi, outside Mumbai’s airport.

These are the books I’ve been reading this year.  Happy Reading in 2012! 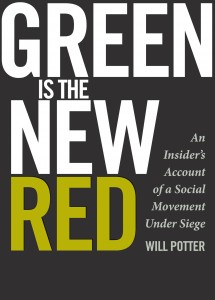 Congrats to Will Potter! His debut book, Green is the New Red: An Insider’s Account of a Social Movement Under Siege, has recently been nominated by Kirkus Reviews as one of the best nonfiction books of 2011. I was first introduced Potter’s work through articles he wrote for Satya Magazine  on the  “chilling effect” of the government crackdown on activists. Potter had been researching how animal and environmental activists became  the FBI’s number one domestic terrorist threat. He had also provided testimony against the Animal Enterprise Terrorism Act. Since then, he has been reporting actively on what he calls the “Green Scare” on his blog, and last April, his book compiling years of research was released.

Green is the New Red is a thought-provoking and riveting read that examines several legal cases against activists. He gives particular attention to Operation Backfire, a series of arsons that took place in the late 1990s, as well as the activists arrested for their campaign to Stop Huntington Animal Cruelty (SHAC7). The book opens with the story of Daniel McGowan, who is also the main subject of recent film If a Tree Falls: A Story of the Earth Liberation Front.

Green is the New Red embodies one of my favorite forms of writing. It is part memoir, part history, part investigative journalism. Belonging to the school of “new journalism,” where an author acknowledges his role in the story, this book  is a thrilling read for both its exhaustive research and the intimate nature of the telling. Potter is reporter, activist and friend. While I find the resulting combined perspective to be one of the book’s greatest strengths, balancing these selves while writing had its challenges:

“No matter how many times I might think I’ve escaped these compartmentalized roles of being either a friend or a journalist, of either being part of the story or telling it, I find that I’m still trying to walk the line between them.” END_OF_DOCUMENT_TOKEN_TO_BE_REPLACED

I was so pleased to hear the news that the last of the chimps formerly housed at the Coulston Foundation are on their way to the wonderful Save the Chimps Sanctuary in Florida.

I remember the outrage in 1998, when the U.S. Air Force placed 111 of their former research subjects in Coulston’s care instead of retiring them to sanctuaries.  The Coulston foundation was notorious for animal welfare violations, and eventually the NIH, FDA, and USDA pulled their funding.    On the verge of bankrupcty, Coulston sold his facility to Dr. Carole Noon, director of the Save the Chimps.

Carole Noon, was my very first interview subject for Satya Magazine.  The work that she and Save the Chimps were doing was amazing.  At the time, they were running two sanctuaries.   One was a dream chimp paradise in Florida-this was the ultimate destination for all the chimps.  As they were building and expanding, they were slowly transferring chimps from Coulston’s former facility in New Mexico.  In the mean time, for the Almogordo chimps, their digs received a complete makeover, and Carole and her team worked on renovations, socialization, enrichment for these chimps who were caged in solitary.

Monday night, the last of the chimps housed in New Mexico, started on their journey— “The Great Chimp Migration“— to Florida.

I wish Carole Noon, who passed away in May 2009, was here to witness it.   As she told me, the role of the human being is often just “opening the door.”   She’s definitely opened plenty of doors for hundreds of chimpanzees.